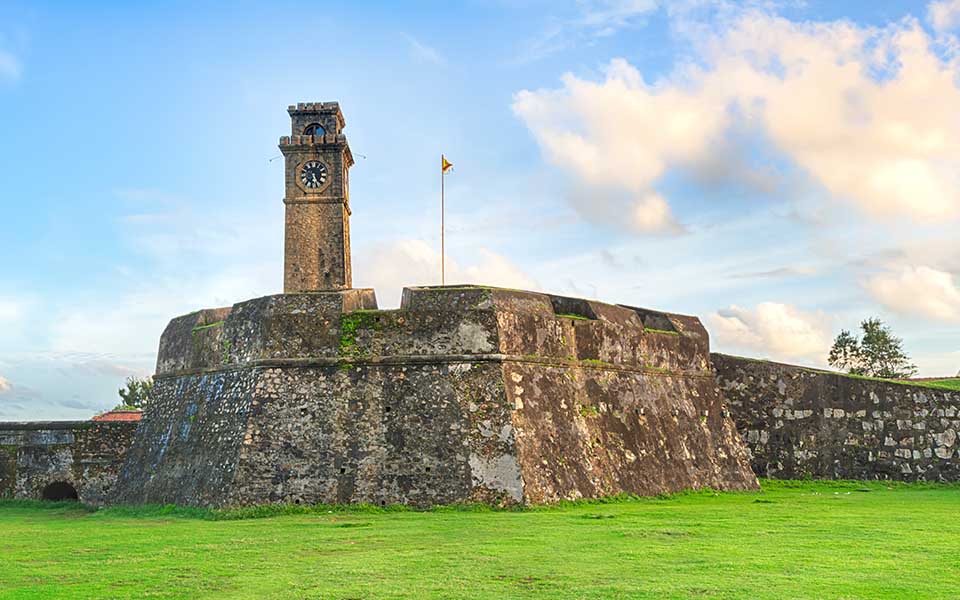 Given the country’s rich and turbulent history, it is little surprise that the island is replete with stunning examples of colonial architecture.

Having been subjugated in turn by Portuguese, Dutch, and British imperialists, just about every corner of the country contains its own striking remnant of this continuing legacy. For true architecture enthusiasts, therefore, the country is a visual wonderland, possessing the allure of times past.

Our blog this week dives into some of the finest buildings and sites constructed in the colonial tradition, providing resplendent sights and charms of old world Sri Lanka.

Once the opulent home of a western-educated philanthropist, Don Arthur de Silva sought to create the home of his dreams in the Richmond Castle in Kalutara.

In building his palatial residence, the wealthy landowner emulated a British style of architecture, observed during his period of study in England, as well as that of the palace of the Maharaja of Ramnad in India.

Sprawled across a 42-acre property, the castle features 99 doors, intricate carvings, numerous stained glass windows, and a magnificent banquet hall fit for the grand balls of yesteryears. The architecture ties in styles hailing from both the West and the East, featuring Indian tiles and Scottish window panes.

While the castle is now only a shadow of its former glory, the property is administered by the Public Trustee and is open to the public for viewing.

Among the many colonial-style architectural edifices in the area, visitors who venture to the misty hills of Nuwara Eliya are not left to wonder why the town is frequently dubbed ‘Little England’. Nestled in the hills of this region lies the magnificent Jetwing St. Andrew’s property. A stunning contrast of both historic architecture and modern amenities, the hotel is a pleasant reprieve from the hustle and bustle of urban life.

With its luxe wood-panelled flooring, high ceilings, quaint landscaped gardens and shrubbery, this countryside getaway is the perfect site for architectural appreciation. If you’re not really interested in its luxurious room, indulgent dining, and other high-end facilities, of course.

Anchored by the Indian Ocean down south, the historic Galle Fort is one place you wouldn’t want to miss on your vacation.

Its sun-dappled, cobbled streets, low stucco buildings, ancient clock tower, and lighthouse are the perfect backdrop for a romantic stroll and shopping trip, without escaping the imaginations of history. First built in 1588 by the Portuguese, it was fortified by the Dutch during their reign, from 1649 onwards.

The area has also been deemed to be a UNESCO World Heritage Site, for its striking illustration of the interaction between European architecture and South Asian traditions from the 16th to the 18th centuries.

If you visit Sri Lanka and are keen to appreciate its architectural traditions and style, a trip to the Galle Fort is a necessary and rewarding exercise.

The National Museum of Colombo

Sri Lanka’s most famous museum is housed in yet another stunning example of colonial architecture. Containing some breathtaking displays of history including the throne, regalia, and bloodied clothing of the last king and queen of Sri Lanka, the museum is equally a site of awe for architecture enthusiasts.

Opening its doors for the first time in 1877, the building was designed by government architect Mr. James G. Smither and was designed to emulate key features of Italian architecture. The museum hosts wood panelled floor and wide open spaces, with a grand staircase to boot, welcoming visitors to tour the halls of history.

Enjoying more than 127 years of a rich and vibrant history, the Galle Face hotel was first built in 1864 as a Dutch villa, emulating true renaissance style.
Initially envisaged as a meeting place for the gentlemen of the colonial epoch, this all changed when the establishment fell into the hands of four British entrepreneurs. The hotel was redesigned in 1894 and converted into a two-storey luxury hotel to suit a much wealthier clientele. Luxury and opulence transformed a once simple colonial style inn.
To this day, one cannot deny the colonial tradition emanating from every inch of the hotel. From its expansive marble halls to its wide open terrace, immerse yourself in old world style and charm while you indulge in some of the finest high tea spreads in the city!