An overview of Dambulla 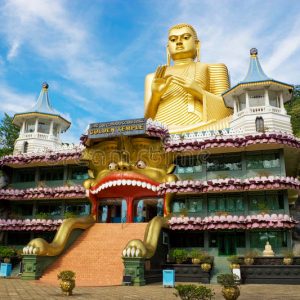 Situated in the Matale District of the Central Province of Sri Lanka, around 150 kilometres north-east of Colombo, Dambulla is one of the island nation’s most prolific and historically-renowned towns. This large town is home to some of the country’s proudest attractions – both historical and modern – and is said to be one of the earliest locations of recorded inhabitancy in Sri Lanka.

Dambulla and its surrounding regions are said to have been inhabited from as early as 700 BC to 300 BC– exhibited by the presence of a vast network of caves and the historical artefacts found within them. Among these historical artefacts are several paintings, artwork, and statues located within the caves that reportedly date back to a period sometime around 100 BC. Known as a major Buddhist heritage site, Dambulla’s Buddhist past is engraved into the royal lore of the country – accentuated by one story in particular.

It is said that the famed caves within the historic Dambulla city provided safe refuge to King Valagamba during his exile from the Kingdom of Anuradhapura for over a decade. The caves for many centuries were used by Buddhist monks as locations for meditation and it is alleged that when the King was exiled, the monks residing in these caves protected him from his enemies and provided refuge to him. Upon his return to the throne in Anuradhapura, King Valagamba constructed a monumental rock temple in Dambulla to honour and show gratitude to the monks who protected him during his exile. Remnants of the rock temple are still one of the most sought-after sights of the region by tourists, both local and international.

What is significant about the preserved cave temple is that it is largest of its kind in Sri Lanka. With a maximum height of 160 meters, the rock tower stands out gloriously within the region. The network of caves encompasses more than 80 different caves that have been documented to-date, which consist of a wide array of attractions like statues and paintings – largely centred around the Lord Buddha and his life. There are approximately 153 Buddha statues, 3 statues of Sri Lankan kings, 2 statues of the Hindu God Vishnu, and 2 statues of the Hindu God Ganesh. The caves also boast a stunning network of murals that cover an area of over 2,100 square metres – the murals predominantly depict Buddhist tales, highlighted by the famous story of the Buddha’s temptation by the demon, Mara.

If you happen to be a person with interest in the prehistoric era, Dambulla has a great treat for you. The Ibbankatuwa Prehistoric burial site, located in close proximity of the town, is said to be over 2700 years old – well before the arrival of Buddhism to Sri Lanka 2500 years ago. The identification of the prehistoric site has led to the discovery of human skeletons, which as scientific analyses confirm, dates as far back as 750 BC. Further analysis has also show evidence of organized communities that depended on agricultural and farming techniques, affirming the long-held belief of Sri Lanka having thriving and innovative communities living within it for several thousands of years.

A fun fact about Dambulla is that it is also home to one of Sri Lanka’s most stunning cricket stadiums, the Rangiri Dambulla Stadium, which draws a lot of its fame for being one of the fastest-built stadiums (167 days)! If you happen to be in town when a cricket match is going on, be sure to check it out – there are few experiences like the atmosphere of a competitive international cricket match where the Lankan Lions are playing.

If you would like more information about Dambulla, please feel to reach out to us or read the other sections in this segment to learn more specific details about the city!