An overview of the Kaudulla National Park 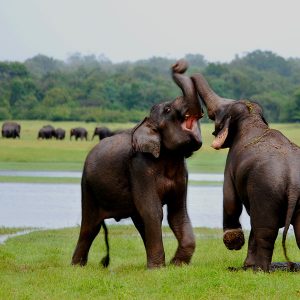 One of the island nation’s classified “Important Bird Areas” (IBA), the Kaudulla National Park is located over 197 kilometres (122 miles) away from the commercial capital of Colombo. Established in April 2002, the park is one of the youngest national parks on the island. While the site’s prominence as a national park is rather recent, its historical significance dates back to the country’s illustrious pre-colonial history. The region was formerly home to 16 irrigation tanks built by the legendary King Mahasen, who ruled the region during the late 3rd century and early 4th century. Following this period when the Kaudulla region contributed significantly to the irrigational activities of the area, it underwent a period of significant abandonment that spanned into the country’s multi-century colonial occupation. It is highlighted that this period of abandonment helped convert the park and its surroundings into a flourishing haven to a variety of plant and animal life. The park was refurbished in 1959, a decade after the end of colonialism on the island, which continued its ascension as a major biodiversity hotspot. Today, the park is still home to many plant and animal life, which includes large mammals, fish, and reptiles.

The parks unique ecosystem gives it the ability to maintain an abundance of food and water, even during its 6-month dry-period from April to October. This makes the site a major point of attraction for large numbers of herbivorous mammals, like elephants, throughout the year. The region’s climate and significant rainfall facilitates substantial plant and grass growth during the rainy season, which sees the park receive an annual rainfall of around 1,500–2,000 millimetres.

The national park is home to approximately 24 species of mammals, 25 species of reptiles, 26 species of fish, and 160 species of bird – according to recent park official estimates. The mammals include Sri Lanka’s famous elephants, which means that if you happen to be in the region at the right time of the year, you will be able to witness a truly remarkable sight. During the dry season, elephants typically go on their migratory movement towards the famous Minneriya tank to drink, feed, and hydrate. This migration is then followed up by a subsequent shift towards the Kaudulla tank during the month of September – the penultimate month of the dry season. Given that the Minneriya and Kaudulla tanks are relatively close by – about a 50-minute drive from each other – you have a good 6-month window to visit and capture this special migratory moment that many people from all parts of Sri Lanka and the rest of the world flock to see every year. It is estimated that the total number of elephants residing in the dry zone is increasing and, according to the latest tallies, the estimated total population stands at 211 elephants in Kaudulla. The size of this herd is what makes experiencing the migration all that more special – expect to see many adorable calves running around the area.

Other species that live in the park include the Sri Lankan sambar deer, axis deer, chevrotain, wild boar, Sri Lankan leopard, and sloth bear. The Kaudulla National Park is also uniquely known as the home to a rare albino Sri Lankan axis deer – one of only a handful of its kind in the country. Notable reptilian attractions in the region are freshwater turtles, the Indian flap-shelled turtle, and the Indian black turtle. If you consider yourself a wildlife enthusiast, environmentalist, or conservationist, the Kaudulla National Park will provide you with endless delights and phenomenal sights.

There is so much to check out in Sri Lanka! If you plan on visiting the region, expect to be amazed by the endemic animals and overwhelming biodiversity. Would you like more information about the region? Please get in touch with us or check out the other sections below!