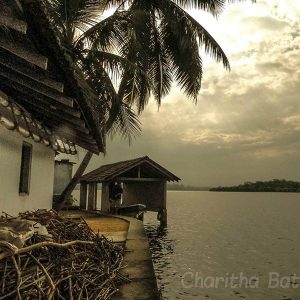 Located in the highly popular and scenic southern coast of Sri Lanka, the Madu Ganga, is a site of major ecological and historical importance. Closest to the idyllic coastal town of Balapitiya, approximately 60 kilometres off Colombo, it is a highly frequented tourist site, not least due to the breathtaking river safaris undertaken here. Comprising of an estuary and many mangrove islets, the Madu Ganga is a well preserved ecosystem, and is often touted as one of the largest undisturbed wetlands remaining in Sri Lanka.

Boat rides here last sometime between 2-3 hours, and are nothing short of a visually stunning and serene experience. Want to slot in some spa time while you foray across the winding Madu Ganga? Simply ask your tour guide to take you to one of the many fish farms located on the river. Here, you’ll be able to enjoy a unique spa experience, courtesy of a range brightly coloured fish eagerly nipping away at your feet. Unlike traditional spa treatments this isn’t too expensive, with the damage to your wallet generally being a couple hundred rupees at most.

The river hosts around 64 islands that are home to exotic flora and fauna, sites of worship, as well as a thriving cinnamon processing industry. While you may not have time to visit most, your tour guide is sure to take you to a few of the main islands for a little exploration, as well as some friendly chit-chat with the locals. Undoubtedly, the most frequently visited of these would be the biggest island, the Maa Duwa. As well as hosting an ancient temple, it is home to a Bo tree reportedly more than 600 years old. An excavation done here a few years ago also revealed the remains of 1000 year old granite toilet stone, giving it an added historical appeal.

There are other temples and devalayas scattered among the many islands on the river, one of which can be found on the Satha Paha Duwa, the smallest island of the lot. The religious significance of Madu Ganga does not end there, however. It is believed that the Buddhist Amarapura Nikaya Sect had its first higher ordination ceremony on a fleet of boats that were anchored here in the early 19th Century. It is also believed that notable rulers such as King Dhatusena and King Mugalan took refuge in some of these islands during various parts of Sri Lankan history. The islands also host a number of vendors selling food and beverages for famished travellers, so don’t miss out on stopping for a refreshing thambili or other Sri Lankan delicacies while you soak up the scenery.

The wetland is said to host approximately 300 species of plants belonging to a whopping 95 different families, not to mention the myriad wildlife that inhabit the islands and its surrounding area. Safari goers frequently witness the diverse species of fish, reptiles, butterflies, birds and other mammals that inhabit this lush wetland, providing visitors with both a memorable experience as well as a clear reminder of the ecological significance of the Madu Ganga. Given that fishery is the primary livelihood of the people inhabiting the islands, you will also witness Kraal Fishing setups, most often made of bamboo. Boats often have to navigate carefully around these, given that fishing nets are extended over large portions of the river in some areas.

Do not miss out on witnessing the cinnamon processing carried out on some of the islands, where you’ll also be able to purchase some of the finished products from the locals!

Want to know more about this stunning escapade into Sri Lanka’s mangrove wetlands? Give us a shout and we’ll get in touch with more information. Feel free to check out the other sections below for more great places to visit during your holiday!