An overview of the Maduru Oya National Park 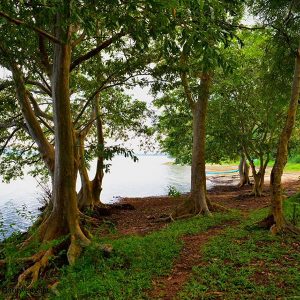 One of the lesser known national parks of the country, the Maduru Oya National Park was established under the comprehensive Mahaweli development project that commenced during the late 70s. The project oversaw transformative infrastructural changes within the region. One of the key purposes of the region, in addition to the national park, is that it also home to the Maduru Oya Reservoir, which is used as a critical catchment area for the region. The park, established in November of 1983 and about 180 miles north-east of Colombo, was set up with the sole purpose of providing safe sanctuary to wildlife, specifically for the island’s sacred elephants and other unique species, which you will hear more about below. Another unique attribute of the national park is that you will be able to visit a community of Vedda people, the indigenous ethnic community of Sri Lanka, who live within close proximity of the park in an area known as Henanigala.

One of the four national parks established under the Mahaweli Development Project, the park is not just a natural attraction, but a historical one as well given that its surroundings include several Buddhist ruins in the form of shrines, temples, dagobas, statues, and hermitages – found in the neighbouring towns Henanigala, Kudawila, Gurukumbura, Ulketangoda, and Werapokuna. These sites span multiple eras of Sri Lankan history and if you are lucky/have the time, you should ask your guide to take you to Kandegamakanda to show you some of the earliest Brahmi inscriptions on the island that allegedly originate from the 1st-3rd centuries.

This site is also known for being the home of the indigenous community of Sri Lanka, as well as the location of the famous Mahiyangana temple, which is of great importance to the Veddas. You could visit the temple either after or before visiting the park, as it is located just outside the park’s premises. Said to be descendants of the first king, Vijaya, and Queen Kuveni, the Veddas have resided in this region of the island long before the majority Sinhalese population arrived on the island from India, back in 543 B.C. The Veddas are semi-nomadic, although in recent times they have settled into a more grounded lifestyle by relying on small-scale cultivation and vegetation, in addition to their typical hunter-gatherer habits.

The park is also home to a diverse range of animals – including several endemic species. Much like many of the country’s other parks, the Maduru Oya National park acts as a haven to many of the island’s threatened mammals, including elephants of which there are an estimated 150-200 within the park during certain times of the year. Other protected mammals include the famous Sri Lankan sloth bear, leopard, and water buffalo. Despite the park’s relatively limited fame, when compared to other parks like Yala and Wilpattu, the Maduru Oya park will provide you with some great animal sightings – if you consider yourself a wildlife enthusiast.

If nature is one of the biggest motivations behind your visit to Sri Lanka, then the Maduru Oya National Park is a place you will have to check out. In addition to its beauty and biodiversity, the region is also the gateway to aspects of Sri Lanka’s great pre-colonial history. The park and its surroundings will provide you with the opportunity to indulge in all of this and more!

There is so much to check out in Sri Lanka! If you plan on visiting the region, expect to be amazed by the endemic animals and overwhelming biodiversity. Would you like more information about the region? Please get in touch with us or check out the other sections below!