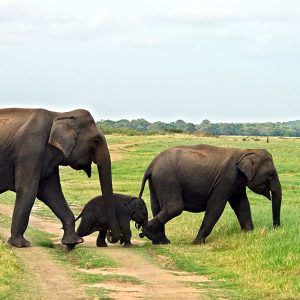 Minneriya is a little town tucked away in the North Central Province of Sri Lanka, approximately 200 km away from commercial capital, Colombo. Depending of course on which of the many routes you take to travel there. Like a number of other towns and cities across the island, it is home to national treasures, prized in the hearts of the local population. With its sites of historical significance and encapsulation of plots of lush greenery, home to a diverse range of flora and fauna, the town is a frequent pitstop for seasoned travellers and wildlife enthusiasts. Despite not being a traditionally popular tourist hotspot, its proximity to cities such as Anuradhapura and Polonaruwa, both UNESCO World Heritage Sites, has contributed in drawing in crowds of tourists to the town throughout the year.

Its significance primarily revolves around the Minneriya National Park and the Minneriya Tank, each prominent for very different reasons. Originally a wildlife sanctuary, the Minneriya National Park was declared as such in 1997. This was primarily done to protect the catchment of the Minneriya Tank, as well as to preserve the rich wildlife in the area. Every year multitudes of visitors turn up in this little town armed with binoculars and fancy cameras, to capture the breathtaking migration of elephants into the park from other parts of the country for the dry season. Along with a few other sanctuaries, Minneriya is also a part of the 70 Important Birds Areas (IBA) in Sri Lanka. The wildlife in the park consists of a whopping 160 species of birds, to say nothing of the multitude of mammals, amphibians, reptiles, fish and yes, even butterflies.

Unsurprisingly, the park is home to two types of endemic monkeys, and also hosts the elusive and endangered Sri Lankan leopard and sloth bear. All of this is in addition to the herds of elephants that graze peacefully on the park’s green(er) pastures, which is the primary allure to visitors who visit this ecological wonderland. It is located close to Kaudulla National Park, which similarly sees the visit of hundreds of elephants every year during the dry season. This too is an area that has been deemed an IBA, give the numerous species of birds that inhabit the park. The proximity of these national parks generally means that those who visit either, often make a trip to the other.

The other site of importance is the Minneriya Tank, hailing from Sri Lanka’s glorious Anuradhapura era. Built by King Mahasena, who contributed greatly to the irrigation system of the country at the time, is credited for this tank, believed to be the largest of which he constructed. It is said that the tank was capable of holding over 20 billion gallons of water, which arrived from the Amban River, situated approximately 48 km away, through the Elahera canal.

Minneriya is also situated relatively close to cities such as Habarana, another hotbed for tourist activity. Located approximately 25 kilometres away, it is home to a UNESCO World Heritage Site, the lion rock fortress, Sigiriya. Once home to King Kashyapa, a ruler on the run for the murder of his kingly father, Sigiriya is frequently cited as the 8th Wonder of the World. The fortress sees thousands of visitors flock to its rocky solitude every year, clambering up its steep stairways to reach panoramic views of the countryside atop the rock. This means that the area hosts a range of hotels, including a line of high end luxury resorts, making quick forays into Minneriya a convenient and often mandatory item of agenda upon visiting Habarana.

Keen to know more about this far-flung hideaway? Hit us up for more information and we’ll reach out as soon as we can! While you wait, feel free to peruse the sections below for more idyllic locations to visit when in sunny Sri Lanka!