The Kandy Esala Perahera: A Religious Procession Unlike Any Other 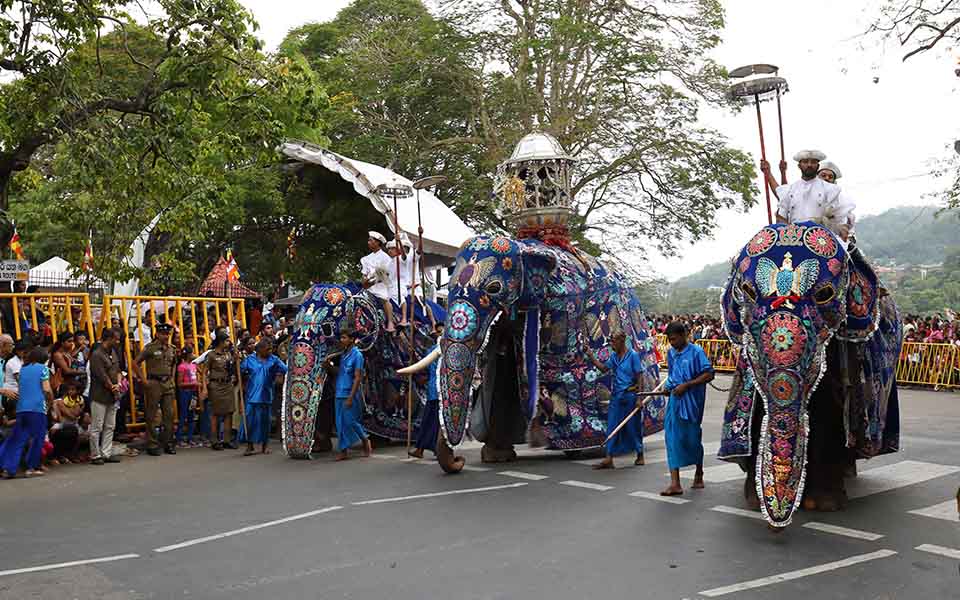 The Kandy Esala Perahera is always a feast for the senses.

Among the finest Buddhist religious festivals in the country, the procession is a mesmerising array of dancing, fire, music, and bejewelled displays. Lasting approximately 10 days, this long-standing ceremony takes place on the streets of the capital of the Hill Country, reinvigorating the spirituality and culture of Sri Lanka.

In Sinhalese, Esala is used to denote the month of July, the general time period within which the perahera is held every year. This colourful religious celebration is organised to honour the sacred Tooth Relic and the four guardian gods, Natha, Vishnu, Kataragama, and the goddess Pattini. The Tooth Relic itself is easily one of the most important religious artefacts the little island nation possesses. Said to have belonged to Lord Buddha himself, the relic occupies a prominent spot in the heart of Kandy, within the Dalada Maligawa, drawing in starry-eyed tourists and reverent locals to this sacred spot day-in and day-out.

Originally a celebration through which people would entreat the gods for rain to cultivate crops and enrich the Kandyan Kingdom, the perahera, like the Tooth Relic itself, is a lasting memoir of times long gone. The books of history show that the procession used to be a symbol of the prosperity of the Kandyan Kingdom, drawing out the sovereign ruler into the public arena. Amongst his royal chiefs and a large gathering of citizens, the king himself would carry the relic and place it in the golden ransivige upon the chief tusker.

With the relic as its centerpiece, The Esala Perahera is conducted with no extravagance or expense spared. The procession is heralded by the sound of sharp whips, and viewers can expect to see magnificent tuskers patiently walking the streets of the city among dancers, drummers and breathtaking fire exhibitions. Displaying as much reverence as one could expect from such highly intelligent creatures, the elephants are decked in the finest silks and garments and form a significant part of the perahera.

The procession is traditionally inaugurated with planting of the kap at the four devales of the gods and goddess, within the compound of the Temple of the Tooth (Dalada Maligawa). Usually, an Esala tree which is in full bloom at this part of the year, is cut and its stem planted as the kap at the four shrines. In more recent times, however, instead of Esala, a Jak tree is cut instead, its four sections planted in each of the devales.

Other peraheras in the country generally follow the same format adopted by the Esala Perahera, although few really live up to the legacy set by this stunning display of local culture. Easily considered among the most beautiful pageants in Asia, visitors who find themselves in the city of Kandy during this time, can find people of all ages peering from their windows, seated excitedly on the rough pavements, and standing along the streets, staring awestruck at this cultural celebration.

A reminder of the golden age of Sri Lanka, the Kandy Esala Perahera is a ceremony that should not be missed, for anyone keen to experience the depth of the country’s cultural heritage.

At Fernando Travels, we’re the best at planning adventures you’ll never forget. Contact us today and find out how we can help you plan the trip of a lifetime to Sri Lanka!