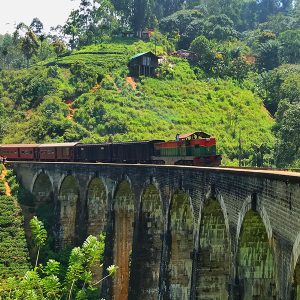 Hailing from the Badulla district, the city of Bandarawela is a treasure chest of old colonial attractions and scenic landscapes. The second largest town in the district, it is located a couple of kilometres away from district capital, Badulla, and around 200 kilometres away from Colombo and its bustling city life. The cool and pleasant weather in the town makes it a popular tourist destination, especially for those who prefer the quiet atmosphere of the misty mountainsides of the Uva Province.

Popular during the colonial era of Sri Lanka’s history due to its favourable climate, Bandarawela is nestled within the hills criss-crossing the Uva Province and the Central Province. The town is notable for a number of reasons, not least due to its proximity to historic religious sites. An ancient Dhowa Rock Temple built by King Walagamba finds its home close-by, and contains a stunning Buddha figure sculpted from rock. This is in addition to the breathtaking paintings in the temple, depicting Jataka stories, hailing from the Kandyan era. There are also a few prominent churches in the locality as well, including both Catholic and Methodist places of worship.

Given the favourable temperature, the area is ideal for tea cultivation and for growing other fresh produce. The livelihood of the town is heavily dependant on agriculture, with many people either engaged as labourers in tea plantations or in vegetable cultivation. Many types of vegetables are grown here, as is common throughout the district. Apart from this, tourism also serves as an important source of income to the town, due in part to the cosy hotels and rest houses flourishing in the area.

One of the many things you can schedule to do when you arrive in the city, is to pay a visit to the famed Adisham Bungalow. Serving as the monastery of Saint Benedict for Benedictine Monks, the hall hosts a relic of St. Sylvester in its chapel. Designed in the Tudor and Jacobean style across 10 acres of land, the hall played host to a number of prominent colonialists until the retirement of its owner, Sir Thomas Lister Villiers. Purchased by the Roman Catholic Church in 1961, it was subsequently converted into a monastery. The bungalow, situated in the midst of tranquil scenery, is presently open to visitors keen on soaking up its architectural beauty and rich historical heritage.

Lipton’s Seat is another prominent attraction, from which point you’re privy to some breathtaking views. Believed to be the spot Sir Thomas Lipton watched his tea empire grow, you can make your way to the top of the mountain, often accompanied by tea pluckers from the area, for some stunning vistas of the city and its surrounding areas.

If you’re keen on seeing some of nature’s gems, don’t miss out on the crystal-clear waterfalls in the region. The Diyaluma Falls and the Ravana Ella Falls are two sites you must not miss out on if you’re ever in the city. You could also visit the Mlesna Tea Fortress if you’re up to take a quick break from all your sightseeing and taste some exquisite local teas. If you’re also looking for a luxurious place to rest and relax on your holiday, the Bandarawela Hotel is your go-to place. A little gem tucked away in the heart of the mountains of the Uva Province, the hotel belongs to the reputed Aitken Spence group, and is a spot of comfort and indulgence during your stay in Bandarawela. The hotel pub is somewhat of a hotspot and popular meeting place for locals and tourists in town.

Want to know more about Bandarawela and other places to visit in the Uva Province? Get in touch with us and we’ll be happy to provide you with more information! In the meantime, check out our sections below for more things to see and do when in Sri Lanka!