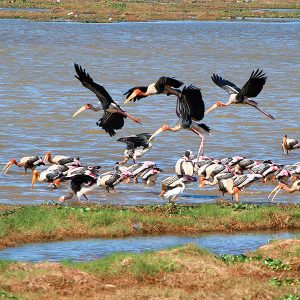 If you’re ever in the mood for some serious bird watching, the Bundala National Park is the perfect spot for you. Located around 245 kilometres away from commercial capital, Colombo, it boasts of an extensive range of around 197 species of birds, many that can be seen migrating in expansive flocks across the skies. Designated as a national park in 1993, it originally started out as a wildlife sanctuary. It was also the first wetland to be declared a Ramsar site in the country, and that which was designated a biosphere reserve by UNESCO.

While the region was an area affected by the devastating Boxing Day Tsunami in 2004, due to its protection by the sand dunes common to the Hambantota area, the park suffered little damage. It is a definite must visit if you’re a bona fide nature lover or tree hugger, given that the ecological areas of the park contain around 7 terrestrial habitat types and 6 wetland types. It is believed that a whopping 282 plant species belonging to 90 families can be seen in the protected area, while you traverse its land in search of breathtaking avifauna soaring across the skies.

Unsurprisingly designated an Important Bird Area in Sri Lanka, you’re sure to glimpse magnificent creatures inhabiting the trees and skies of the Bundala National Park. The Greater flamingo that migrates to the park from Rann of Kutch from India, is a highlight for all those visiting the site. Other favourites of ornithologists, including the medium and small sized waders, can also be seen here alongside a range of other brightly coloured winged creatures. These include the ominous Black-necked stork, Eurasian spoonbill, Asian openbill, and Painted stork.

As with most other national parks in Sri Lanka, the sanctuary in Bundala is also home to a range of other magnificent creatures including a few Asian elephants, and other mammals such as the Toque macaque that can be seen swinging from tree to tree, the common langur, jackals, and perhaps if you’re fortunate enough, a couple of elusive and deadly leopards, stalking among the vegetation of the park. The area is also known to host a range of fish species, as well as a number of reptiles, including endemic snakes.

The park is located in Hambantota, a part of the tourist friendly southern region of the country, famous for its idyllic beaches and golden coasts. The district and town are popular areas, given its proximity to a cornucopia of wildlife and ecological wonderlands. Other national parks such as Yala, Ussangoda, and Kumana, are located rather close-by to this coastal city and district. These are of course in addition to other popular activities that can be done here such as beach hopping and sea bathing. The renowned international hotel franchise, Shangri La, also recently opened a resort in Hambantota, which has also undoubtedly increased tourist traffic in this area – never a bad thing for a city located in the sunny coastal belt of Sri Lanka’s southern region.

Want to know more places to visit when you head down south? Reach out to us for more information and we’re happy to oblige! Check out some of our other sections while you wait, for more exciting things to do on your holiday in Sri Lanka.