An overview of Galle 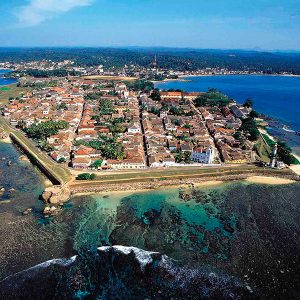 Galle is one of Sri Lanka’s most popular cities. Situated on the southwestern corner of the island, approximately 119 km south of Colombo, this coastal paradise is one of the country’s most iconic, given its historical value. The administrative capital of Southern Province, Galle was initially known as Gimhathiththa prior to the arrival of the Portuguese in the 16th century, when it was the main port on the island. There are two explanations as to how Galle ended up with its name today.

One explanation suggests that Galle is said to have been named after the Sinhala term, Gaalla, which directly translates to the place where cattle herd together. This could be directly related to the city’s identity as a gathering point for citizens from all over the country who travelled to Galle by bullock cart, which resulted in hundreds of carts and cattle being stationed all around the city. Another alternate explanation is derived from the city’s Dutch colonial past and the Dutch word “Gallus”, which means rooster and was the symbol used by the colonizers around the city. No matter where the city’s name originates from, one thing is for certain and that is that the city is one of the island’s most recognized in many parts of the world. The city’s rich cricketing history and famous cricket stadium, located under the shadow of the renowned Galle Fort, makes it a region of the world that would catch the eye of any tourist.

Galle rose in significance during the 17th and 18th centuries, during the Dutch and Portuguese colonial period, where it became one of the best examples of a fortified city built by the Portuguese in the whole of South and Southeast Asia.  Today, the Galle fort is a designated World Heritage site and is the largest remaining colonial era fortress in all of Asia. Galle is full of iconic architectural landmarks, which include the city’s natural harbour, the National Maritime Museum, St. Mary’s Cathedral founded by Jesuit priests, and one of the most prominent Shiva temples on the island.

In addition to its important historical and religious sights, the region is also known for its significant natural and geographical features, which includes Rumassala in the neighbouring town of Unawatuna – a large hill that forms the eastern protective barrier to Galle Harbour. Rumassala’s historical value stems from local lore that links the hill to some of the Ramayana’s major events – one of Hinduism’s greatest stories.

Demographically, the city of Galle has a population of around 91,000 people, which comprises multiple ethnic groups. Much like in many other parts of the island, Galle has a majority Sinhalese population, which consists of approximately 66,000 people (around 73% of the total population), 23,000 Sri Lankan Moors (around 25% of the total population), just under 1000 Tamils (around 1% of the total population). The city is also home to several other communities, which include Indian Tamils, Burghers, Malays, and people with European origin of whom some have established themselves in the region by partnering up with local tourist businesses. The city is also home to the famous Galle Literary Festival, which draws authors from all over the country and the world to one central point each year – if you happen to be around in January, be sure to check it out!

Galle is one of the country’s most exciting and vibrant cities, given its historical significance, and it is most definitely a city you will want to check out when you visit Sri Lanka. If you would like more information about Galle, please feel to reach out to us or read the other sections in this segment to learn more specific details about the city!