An overview of Haputale 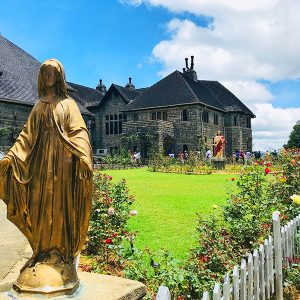 Located in the hilly Badulla District within the Uva Province of Sri Lanka, Haputale is one of the island’s biggest hotspots for bio-diversity, given that it is home to a wide variety of animals and plants. Much like the neighbouring towns within the district, Haputale also boasts a climate that is much cooler than what you would find in many of the other regions of the island – averaging a yearly temperature of around 23°C, with the occasional lows of around 13°C. Visitors who are travelling across Sri Lanka, especially within the hill country and southern plains, are likely to pass through Haputale, which offers breath-taking views of the island’s landscape -views that stretch for many kilometres on days with clear skies and limited mist.

It is important to highlight that, in 2010, Haputale was identified by CNN as one of the most overlooked destinations in the world. This comes as no surprise given the region’s incredible biodiversity, stunning views, and rich culture. One of the more diverse parts of the country, Haputale has a population of around 55,000 citizens that comprises of a majority Sinhala population of approximately 30,000 people, a minority Sri Lankan Tamil population of approximately 5,000 people, a Muslim population of around 4000 people, and a significantly large Indian Tamil population of over 16,000 people. This relative diversity makes a walk around the Haputale town a rich experience, with the opportunity to closely interact with the friendly locals who are always open to a good conversation over a cup of Ceylon Tea. If you happen to be in Haputale, make sure a stroll around the city is on your itinerary.

One of the most famous locations in Haputale is Lipton’s Seat, which is a sight you must visit if you are in Sri Lanka. The location gets its name from its historical role as a faved spot of Sir Thomas Lipton – a famous Scottish merchant and the man behind the world-renowned Lipton Teas many around the world enjoy today. The Scot built his mark in Sri Lanka during the late 1800s during the British colonial period, which made it easy for him to buy a plethora of tea plantations, where he then employed many Indian Tamil workers to work on them. This is mostly where the region’s relatively higher number of Indian Tamil population originates from.

The global brand you know today, Lipton, was born in these plains as Lipton Ceylonta, which was then marketed and exported to many parts of the world today. It is said that Sir Thomas Lipton would sit down in this location with a cup of team and take in the sights of his many tea plantations – most notably, the Dambatenna estate, which he considered the fruit of his entrepreneurial exploit. Today, visitors from all over the country and the world flock to the site to experience stunning vistas of four different provinces – the Southern, Sabaragamuwa, Central, Eastern, and Uva provinces. Many commuters who happen to be passing through the region take a slight detour and a few minutes to soak up the views – no matter how many times you see it, it never gets old. Make sure you make this a signature attraction on your visit!

The other notable attraction within Haputale, also with colonial roots, is the Adhisham Bungalow, which was built and modelled after Leeds Castle in Kent, England, during the 19th century. In the 20th century, the bungalow was home to a British resident named Sir Thomas Villers who used the building as his holiday/country home, following which it was converted into a Benedictine monastery. If you happen to be an avid fan of birds, a visit to the bungalow will bring you within walking distance of the famous Thangamale Bird Sanctuary. No matter what your preferences are, a visit to Haputale will provide you with nothing short of a thrilling and exuberating experience!

If you would like more information about the town of Haputale, and the neighbouring region, please feel free to get in touch with us!