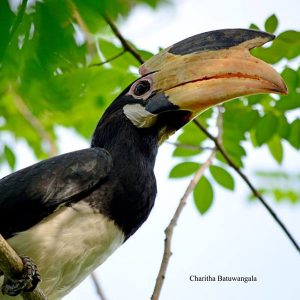 Unlike most other national parks in Sri Lanka, the Kumana National Park is known primarily for its wide array of avifauna. Adjoining the vast Yala National Park, another prominent tourist attraction, Kumana is located around 390 kilometres away from the city of Colombo. Similar to most other coastal regions, the park was affected by the Boxing Day Tsunami in 2004, and was also shut down for a couple of years during more turbulent periods in the country’s 30 year civil war.

Apart from the plethora of wildlife, one is sure to witness around 20 shallow lagoons and tanks scattered across this precious wildlife sanctuary. In fact, the Kumbukkan Oya forms the southern boundary of the national park. The Kumana Bird Sanctuary is also located within its borders, and is considered to be one of Sri Lanka’s most important bird nesting and breeding grounds. Around 255 species of birds have been recorded in the park, including the thousands that migrate here between April and July. The park is a rare bird haven, and is an exciting location to visit if you’re a bona fide bird enthusiast. Catch sights of the elusive Black Necked Stork, or the Eurasian Spoonbill while you make your way through the reserve, or a Pintail Snipe gliding through the air, among others.

Birds however, are not the only creatures you’ll encounter in this enclosure. Mugger Crocodiles, Indian Flap-Shelled Turtles and Indian Black Turtles are common sights in the park, and mammals such as the Sri Lankan Elephant, Wild Boar, Golden Jackal, European Otter and Fishing Cats can also be frequently sighted. Unlike other reserves, elephants aren’t as numerous in Kumana, however a herd of around 30-40 members can usually be seen roaming or grazing on the green pastures of the park.

The Kumana Villu, nestled within this leafy enclosure, is subject to frequent bouts of flooding with sea water, and it is at this swamp that you find many species of birds flitting about and nesting. While on your safari don’t miss out on taking leisurely stops by water pools in the park, as you can often find a range of wildlife languidly soaking up the rays or hydrating themselves by the banks. The most prominent of these are the Kudawila Wewa, Thummulla Weva and the Kotalinda wewa.

Kumana is also a site of historical and cultural significance, and is considered to be part of an ancient civilisation that dates back to the 3rd Century BC. Ancient rock inscriptions have been found here, and the park straddles the route of the annual pilgrimage to the Hindu temple at Kataragama, which draws the participation of both Sinhalese and Tamil communities.

The best part about visiting Kumana is the fact that you can also make a trip to the Yala National Park. Given that both parks are in proximity to each other, if you’re done catching sight of the myriad, exotic birds in the former, make a quick trip over to Yala to witness a great number of mammals and other creatures prowling through this vast habitat. A strict nature reserve that also serves as a national park, the almost 130,000 hectares of grassland, forest and scrubs is a wonderland for animal and nature lovers. The park is home to around 44 varieties of mammals and 215 species of birds. Unknown to most, the park was initially used as hunting grounds for elite British colonials, but has undoubtedly come a long way since then. It’s generally best to visit between the months of February and July, when waters levels are low and animals come out into the open.

Want more information on other national parks and places to visit? Hit us up! We’ll be in touch shortly with what you need. In the meantime check the sections below for more to do on your vacation.