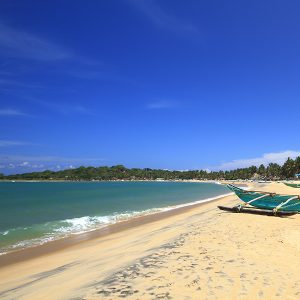 Located in the Northern Province of sunny Sri Lanka, the Mannar district is a significant tourist destination, albeit not for the usual reasons. Boasting of a rich historic and religious heritage, the capital of the district is Mannar Town, and the destination of many a pilgrim, or anyone keen to soak up the abundance of cultural heritage in this far flung region. Located close to tourist hub Jaffna, Mannar too sees its fair share of tourists every year, possibly flowing from all those who make their way to the northern most region of the country. The district possesses numerous tourist attractions, and is thus never short of things to do or see if you ever decide to make it a pitstop on your vacation.

Formerly a part of the Rajarata region of the country between the 5th Century BC and 13th Century AD, parts of the Mannar district soon became territory of the pre-colonial Jaffna Kingdom. The region later came under the control of all three colonial forces, the Portugese, Dutch and British. During British rule the administrative regions of the country were in constant flux, with Mannar later coming to be categorised as part of the Northern Province, together with the Jaffna and Vanni districts. During the devastating 30 year civil war that bitterly affected the country and its communities, much of the Mannar district was under the control of the rebel group, the Liberation Tigers of Tamil Eelam (LTTE), and was only recaptured by the Sri Lankan military towards the end of the war, in 2008.

If you ever find yourself in this untapped and underrated coastal district, make your way to Mannar Island for some undisturbed views of the Indian Ocean and the island’s golden coast. Linked to the mainland by a causeway, the island is approximately 50 square kilometres in area and is a local hub for fishery. Talaimannar, a quiet fishing village on the western region of the island, is believed to be the windiest place in all of Sri Lanka. The area is also considered to be somewhat of a bird sanctuary, so keep an eye out for some magnificent winged creatures as you make your way across the island. Due to its strong winds the quiet village is also popular for kitesurfing and kiteboarding, so if you’re ever in the mood for a little adrenaline rush, Mannar Island is a must visit on your trip.

If you’re interested in a more historical escapade, make your way to the Doric Bungalow at the sun beaten Arippu East, the residence of the first British Governor of Ceylon, Frederick North. Son of the British Prime Minister of the same name, the bungalow was planned by the Governor himself and was named as such due to the architectural style of the house, reminiscent of the ancient Greek Doric Order. The house was built in the beginning of the 19th Century to revive and supervise the pearl fisheries of the area. Despite being originally used as the official residence of the Governor, it was later used by a slew of other government officials. The exterior walls are made from the lime of burnt oyster shells, which in its heyday appeared as though it was constructed of marble.

Another sight you can’t miss out on are the many Baobab trees lining the streets of Mannar. What makes this particularly noteworthy is the fact that these trees are common to the African continent, but deeply anomalous in an Asian country. You can also visit some of the numerous places of worship in the region, including the Shrine of Our Lady of Madhu, the ancient Buddhist temple of Thanthirimale or the breathtaking Thiruketheeswaram Kovil.

Want to know more? Get in touch with us and we’ll provide you with more information. In the meantime, check out the sections below for more places to visit in Sri Lanka!