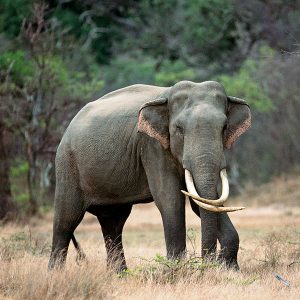 The Wasgamuwa National Park is an animal sanctuary and paradise for bird lovers, spread out over the Matale and Polonaruwa districts in Sri Lanka. Initially designated as a nature reserve in the 1930s and subsequently as a strict nature reserve in the ‘70s, it was later declared a protected area for displaced wild animals as a result of the Mahaweli Development Project in 1984.

Bordered by the winding Mahaweli River and Amban Ganga on the East and West respectively, the name of the park is derived from the Sinhalese words “Walas Gamuwa”, roughly translating to mean “bear woods” in English.

Located around 225 kilometres away from the concrete jungles of Colombo, the park is touted as one of the most biodiverse areas in the island. You can witness around 150 floral species here, and observe the inhabitation of the park’s reservoirs and ravines by a wide array of fauna. The park has also been deemed to be one of the “Important Bird Areas” (IBA) in Sri Lanka, with around 143 species recorded in the park, 8 of which are endemic. You’ll certainly be lucky to catch some of the more endangered birds flitting from tree to tree or hovering near the great Mahaweli River if you come armed with binoculars or a camera. Be sure not to miss out on the aquatic birds, whose flight make a breathtaking capture of life in the park.

One of the largest attractions however, is easily attributed to the diverse range of wildlife that can be witnessed from the safety of your sturdy safari jeep. It is estimated that around 25 mammals take up residence in the green and fertile pastures of this wildlife sanctuary, and are breathtaking to observe in their natural habitat. Watch a herd of around 150 magnificent elephants graze on the planes of the forest, with Marsh Elephants languidly roaming the area near the Mahaweli river. The two dominant types of monkeys that you may find swinging from branch to branch, or curiously peering at you from their leafy kingdom, the Purple-Faced Langur and the Toque Macaque, are endemic to Sri Lanka. If you’re particularly lucky, you may come face to face with the Sri Lankan leopard or sloth bear, moving through the thickets of trees. Either way, you’re at the very least bound to witness some peaceful water buffalos or axis deers meandering through the vast enclosure.

Another exciting attraction is undoubtedly the occasional crocodile who wanders ashore, much to the delight of safari goers. Among the 17 species of reptiles found in the park, around five of these are endemic. Be sure to keep an eye out for the colourful lizards and snakes that roam freely, some of which are endangered and are therefore a rare sight. You’re also sure to witness some stunning swarms of butterflies, flitting their way around the reserve, making a colourful display with their paper-thin wings.

For all history buffs, the park has something to offer you too. Ruins of ancient irrigation tanks built by the revered King Parakramabahu I, can be seen in the park. Its plains have also been the site of certain epic battles in Sri Lankan history, and the ruins of the Chulangani Chaitya can be found here as well. Some of the artefacts which were recovered from this site include a bowl that is believed to have been used by Sri Lanka’s last ruler, King Sri Vikrama Rajasinha.

Regardless of whether you’re a nature lover or not, you’re bound to enjoy a scenic safari in the lush surroundings of the Wasgamuwa park. Make sure you pay a visit if you ever find yourself in the area!

If you’re keen to know more, feel free to hit us up! Check out our sections below for more fun facts and ideas on what to do when holidaying in Sri Lanka.