An overview of Yapahuwa 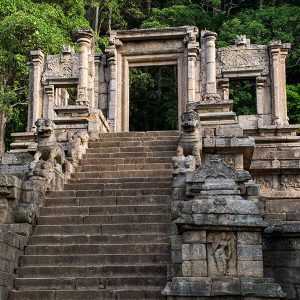 Sri Lanka is no stranger to rock fortresses given that one of its most iconic sights happens to the be the Sigiriya Lion Fortress. Yapahuwa may be lesser known than Sigiriya in most parts of the world, however, its magnitude cannot be undermined or ignored. One of the former pioneering capitals of medieval Sri Lanka, the Yapahuwa rock citadel is located directly in the north-western part of the island, between the ancient cities of Kurunegala and Anuradhapura – both of which are pantheons of Sri Lankas illustrious history.

Built around a massive granite rock rising abruptly almost a hundred meters into the air – well above the surrounding lowlands – the citadel’s most famous occupant was King Bhuvenakabahu, who arrived in 1272. At this point in Sri Lankan history, Yapahuwa had been transferred the privilege of being capital, previously held by Polonnaruwa. The main purpose behind this change was the king’s fear of the impending Dravidian invasions from South India, which led to him bringing the Sacred Tooth Relic with him. You may recall the Sacred Tooth Relic is currently located in Kandy inside the Sacred Temple of the Tooth. While King Bhuvenakabahu was successful in holding off the Dravidians for over a decade, following his death in 1284, the Pandyans of South India invaded Sri Lanka once again and successfully captured the Sacred Tooth Relic. It is important to note, however, that the successor to King Buwanekabahu, King Parakkramabahu the Third, who reigned between 1287 and 1293, visited the Pandayan court in Southern India in 1288 and secured the Sacred Tooth Relic and returned it to the ancient city of Polonnaruwa. Unfortunately, the demise of King Bhuvenakabahu marked the end of Yapahuwa’s role as a major capital and kingdom given that, following its capture, Yapahuwa was largely abandoned and inhabited by Buddhist monks and religious ascetics. That being said, the site is still one of the most visited historical locations on the island.

A visit to Yapahuwa today would give any history buff the opportunity to witness many traces and remnants of the ancient battle defences that once stood to protect the iconic citadel from foreign invaders. The rock citadel also has several Buddhist architectural sights that includes a stupa, Bodhi tree enclosure, and shelter used by Buddhist monks at the top of the rock – confirming that the site was used as a Buddhist monastery at various times during its lengthy existence.

Yapahuwa is also known for its many caves located at the base of the site where additional shrines and unique Brahmi inscription can be found. The southern base of the rock has adopted similar fortification used in Sigiriya, accentuated by the presence of two moats and ramparts that were used as defence and security measures against potential invaders. Yapahuwa is also home to one of the first temples to hold the Sacred Tooth Relic – the Yapahuwa Rajamaha Vihara. As we highlighted, it is said that King Bhuvenakabahu brought the Tooth Relic with him and placed it within the Tooth Temple, located at the top of the Vihara’s third staircase.

The epitome of Yapahuwa’s historical significance was over 700 years ago, however, the sight has managed to maintain its incredible aura of magnificence over the years, which is why it remains one of Sri Lanka’s most visited historical attractions. The climb can be a steep one, therefore, if you do intend on doing so, be vary of this fact and come prepared. However, even if you do have a fear of heights, the surrounding areas of the citadel’s base provide plenty to observe and take in.

If you are looking for a real experience of one example of Sri Lanka’s incredible history, Yapahuwa is a location you must visit! There is so much to see in the region and the surrounding areas! Therefore, expect to be amazed by the ancient city’s glorious history and timeless architecture, among many other incredible attributes. If you would like more information, please get in touch with us or check out the other sections!