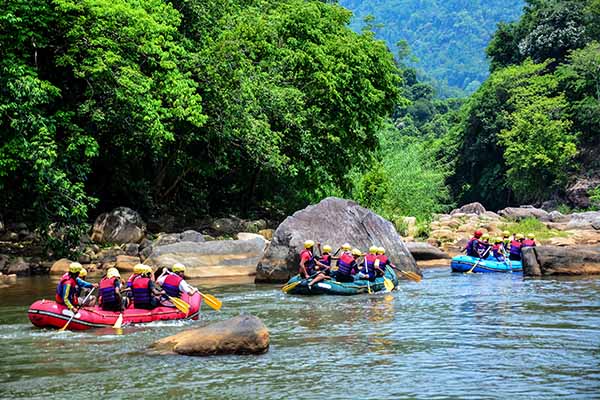 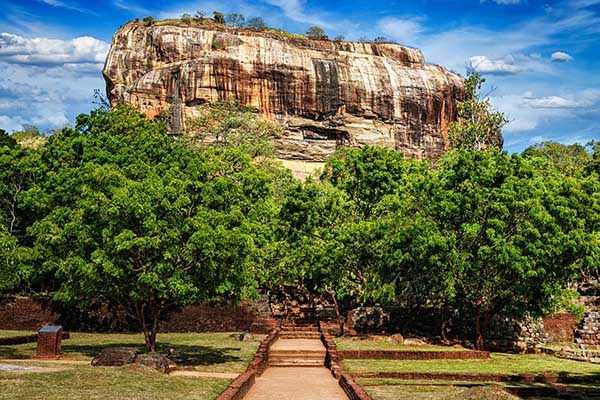 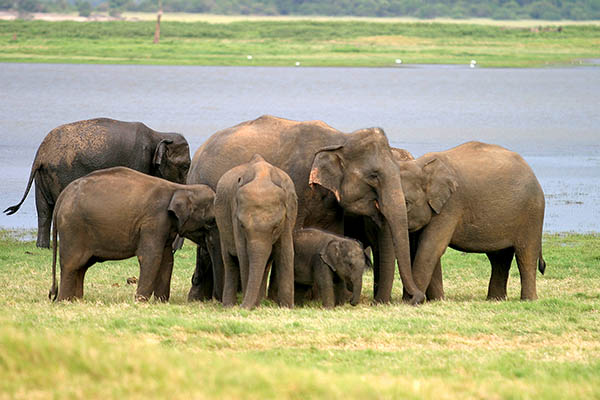 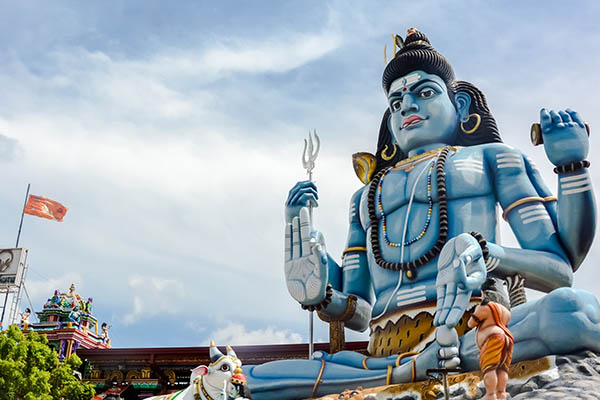 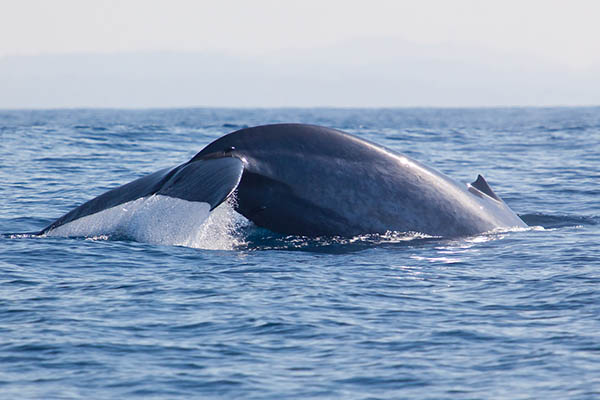 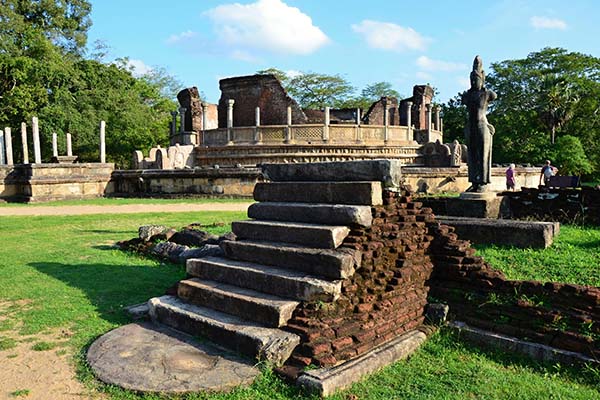 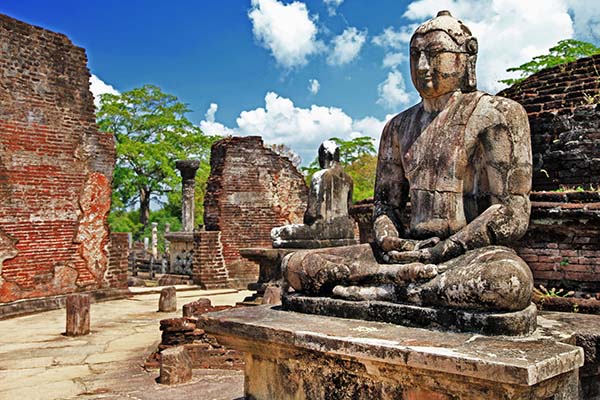 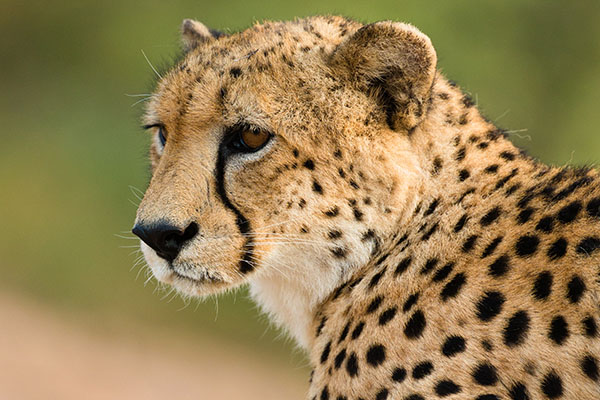 Start your tour off by touching down in the Bandaranaike International Airport and be greeted by one of our representatives, waiting for you in the arrival lounge. All our reps are equipped and ready to help you with any requirements you may have. Once everything is finalized at the airport, a vehicle will be ready to take you to your pre-booked hotel in Colombo for check in. You have most of the rest of the day to yourself, however, later in the afternoon, we will have a tour of the city scheduled for you – be sure to take in some of Colombo’s breathtaking fusion of historic and modern sights.

Your day starts off with delicious comprehensive breakfast spread, which sets you up well for the journey ahead to Nuwara Eliya. About 2.5 hours into your trip, you will arrive at the famous Kithulgala River, where you will make a brief stop to indulge in some white-water rafting. You can be rest assured that trained lifeguards and life jackets will be on-board to help you whenever needed. After this exciting experience, you resume your journey to Nuwara Eliya, during which you will be exposed to a few of Sri Lanka’s beautiful waterfalls and tea plantations. Please keep in mind that the climate in Nuwara Eliya may be significantly cooler than other parts of the country, therefore, we encourage you to bring jackets and clothing along to make sure you are as comfortable as possible. Once you are all settled in at the hotel, we will have a visit to the famous Gregory Park scheduled for you, in addition to a comprehensive tour of the city.

After an early breakfast, you will leave the hotel by around 7 am and proceed to Sigiriya via the Kandy Road. En route to Sigiriya, you will be able to visit a tea factory, museum, and plantation in the town of Ramboda. The environment and aura of this region is breathtaking and can be enjoyed with a delicious piece of local chocolate cake, complemented by our world-renowned Ceylon Tea. Next up on your itinerary is a tour of the historic city of Kandy, known for being home to the famous temple that houses Lord Buddha’s tooth relic, the Sri Dalada Maligawa. Upon completion of the tour, you will leave Kandy and head towards the Pinnawala Elephant Orphanage, where you will be able to experience and interact with adorable baby elephants being cared for on the premises. If you would like to see more, you can experience these majestic animals even more my accompanying entire herds towards a river close by, where you will see them bathe, hydrate, and play. Following this unique experience, you will then visit Pinnawala’s aromatic spice garden and witness how spices are grown and processed, before being shipped out – it is important to note that spices are one of Sri Lanka’s most significant exports. Once you have completed your visit of the spice garden, you will take to the road again and complete the remainder of the journey to Sigiriya. Upon arriving, you will have the rest of the day to yourself to relax and bask in the region’s historical wonder and cultural significance.

Start your day off by climbing the historic Sigiriya rock fortress – one of the most prominent and significant pillars of the island nation’s illustrious history. In addition to witnessing ancient art and architecture as you ascend, in the form of frescos, you will also be able to get some perspective into what ancient royal life was like centuries ago -highlighted by the signature palace ruins and pools used by the ancient King Kassapa. A quick stop in the town of Habarana, after the intense Sigiriya climb, will give you the opportunity to ride an elephant for around half an hour over a jungle area and lake – we can guarantee that this is an experience you will never forget. Later in the afternoon, you will indulge in more adventure by heading towards the town of Minneriya, where you will enjoy a jeep safari at the region’s national park. It is imperative that, while you are within the park premises, you do not exit the jeep, feed any animals, throw items, and use any type of flash while taking photographs. Once the safari has concluded, you will head back to the hotel in Sigiriya, after which you will have the rest of the day to yourself.

Sigiriya was no mere fortress – it was beacon of fortitude and Sri Lanka’s ancient architectural brilliance. At the brief height of its glory, it was a royal citadel for more than 18 years, where, to this day, it marvels as one of Sri Lanka’s greatest wonders. From a historic period comprised of legends, the story of Kassapa (477–495 A. D.) is encapsulated within this fortress. The summit of the rock is nearly three acres in size, with the main building and outer wall on the very brink of the fortress’ precipice. The ruins show signs of ancient gardens, cisterns, and ponds laid out beautifully – almost as if to challenge modern architecture. The garden on the western side of the rock is studded with ponds, islets, promenades, and pavilions that, in their golden years, hosted some of the kingdom’s most exquisite gatherings. Kassapa’s architectural brilliance is portrayed by the existence of underground and surface drainage systems – discovered during excavations.

You will leave Sigiriya bright and early and proceed towards the coastal city of Trincomalee to experience a few hot water springs and the famous Koneshwaran Temple. You will then have the rest of the day to leisurely enjoy the exotic Trinco experience by relaxing on the gorgeous beaches, cycling around town, or trying out the local cuisine. The options are endless, and the choice is all yours!

Take this day to relax at the beach, swim, and try out some of the special water activities in the region – diving, snorkeling, and dolphin watching – depending on the season.

There is far too much to do and take in at the Trincomalee beach in just one day – therefore, you have the entire day to relax and/or indulge further in some of the beach and regional activities.

After your relaxing stay in Trincomalee, you will commence your journey to the ancient city of Anuradhapura and witness its historically famous sights. You can spend the rest of the day at the hotel – swimming, taking in the sun, and relaxing – or you could go for a walk around the town and take in, what many describe as, one of Sri Lanka’s most culturally exuberant cities. The evening brings about an experience like no other, where you get to visit some of Sri Lanka’s most renowned ancient temples, with unbelievable historical significance. We recommend visiting the temples at night because this allows you to witness the beauty of the stupas and surrounding architecture, bolstered by the plethora of illuminative lights and decorations – it truly is a sight to behold.

From the ancient city of Anuradhapura you will then travel to yet another historically significant city – Polonnaruwa, one of the country’s most ancient kingdoms. Polonnaruwa’s architecture boasts the unique influence of South Indian Hindu culture on the Sinhala Buddhist art and architecture – all visible on and within the shrines and monuments scattered across the region. You get to take in some of the region’s ancient history by viewing the ruins of kings’ council chambers and water reservoirs. The silhouettes of the ruins, as sunset comes around, will make you imagine and marvel at how magnificent this ancient kingdom once was.

You begin the last couple of days of your tour by heading back to Negombo – fortunately, there is a lot more to do on the way! First, you will make a brief stop at the Wilpattu National Park for yet another jeep safari, where you will be able exposed to more of Sri Lanka’s diverse wildlife – look out for elephants, leopards, and many more incredible animals! Remember, it is imperative that, while you are within the park premises, you do not exit the jeep, feed any animals, throw items, and use any type of flash while taking photographs. After the safari, you continue your journey back to Negombo, where you can spend the rest of the day relaxing on the beach – allowing you to think about what an amazing few days you have had.

Your last day on the island starts off with a delicious breakfast, followed by a little relaxation time before your transport arrives to take you to the airport – on time to catch your flight back home. Please note that you will have to be at the airport at least 3 hours prior to when your flight is scheduled to depart.

Note that this itinerary is subject to change, based on your departure and flight schedule. 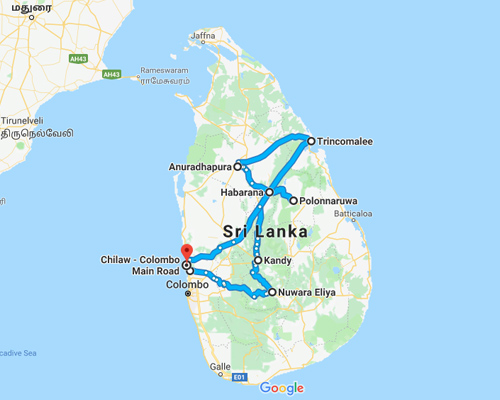